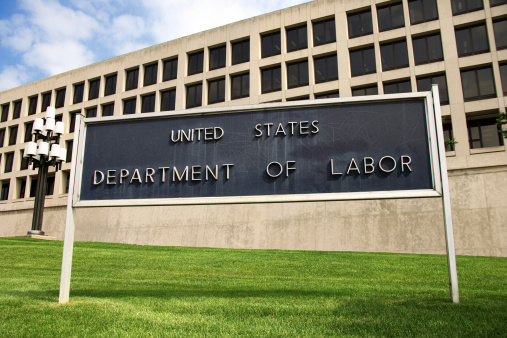 The U.S. Department of Labor is repealing a Trump-era rule it finalized in January that would have made it tougher for gig workers to be classified as employees instead of independent contractors.

Gig workers — such as people who work for app-based services like Uber, Lyft, Instacart, and DoorDash — are typically classified as contractors and not covered by federal minimum wage and overtime laws, nor do they have access to certain benefits and protections afforded to employees under the Fair Labor Standards Act.

The regulation was blocked by the Biden administration, continuing the tradition of new presidents from different parties reversing the previous president's impending rules once they are sworn into office.

“Misclassification of employees as independent contractors presents one of the most serious problems facing workers today,” said Jessica Looman, the principal deputy administrator for the Labor Department’s Wage and Hour Division.

Looman added that the Trump-era rule would have not just impacted gig workers, it would have limited which workers were classified as employees across the economy and allowed more employees to be misclassified as contractors.

Along with blocking the rule, the Biden administration indicated it would look for opportunities to enforce existing laws with regard to misclassification of workers, especially the labor laws that are applicable to lower-wage workers.

Why is worker classification important?

While using different job titles might not seem like a big deal, there are some companies that illegally classify workers as independent contractors to avoid paying appropriate compensation and overtime wages to their employees. The tactic not only creates a competitive disadvantage for companies that obey the law but also provides an opportunity for employers to exploit lower-wage workers who may be too scared of retaliation to speak up.

This is just one reason why we have employment laws, and if a court or government agency decides a company has misclassified workers as contractors or some other type of non-employee, the employer could face harsh penalties and other consequences.

For instance, the Department of Labor recently took corrective action against a Tennessee home health care service provider to recover over $350,000 in back wages after the company intentionally misclassified 50 caregivers as independent contractors to avoid paying them overtime.

"Misclassification denies employees access to critical benefits and protections they are entitled to – overtime, the minimum wage, family and medical leave and, in some cases, safe workplaces," Looman wrote in a recent post on the U.S. Department of Labor Blog. "It generates substantial losses to the U.S. Treasury and the Social Security and Medicare funds, as well as to state unemployment insurance and workers’ compensation funds. It cheats every taxpayer. It undermines the entire economy."

“We’ve seen employers are increasingly misclassifying their workers as independent contractors in order to reduce labor costs and take a lot of protections away from workers, including minimum wage and overtime,” Walsh said.

If your rights have been violated, Nilges Draher can help

Your time is valuable and you deserve to be compensated appropriately for the work that you do.

Unfortunately, a lot of employers try to pad their profits by exploiting workers and denying them employee status — even if it violates the Fair Labor Standards Act.

If you believe you've been misclassified by your employer and you're owed unpaid wages or overtime, an employment lawyer can protect your rights and fight for the compensation you deserve.

Nilges Draher LLC is one of the largest and experienced overtime and minimum wage litigation practices in Ohio, and our attorneys have successfully represented workers in a wide variety of employment lawsuits.

In fact, our law firm previously secured a $5.9 million settlement on behalf of workers who were misclassified by their employer as outside salespersons who were exempt from overtime.

Discover what an experienced employment law attorney can do for you. Contact us today to book your free consultation.