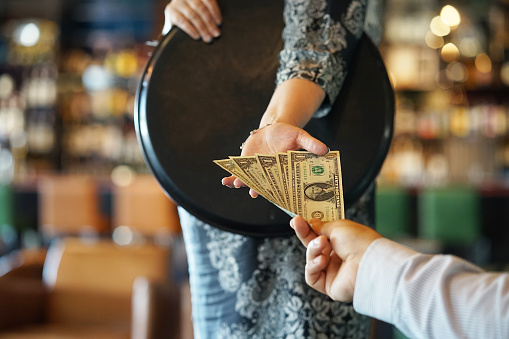 The U.S. Labor Department recently ordered a restaurant to pay $76,000 in back wages to 10 employees who were forced to share their tips and paid below minimum wage, according to a recent news story about the wage law violation published in The Daily News.

Based on an investigation conducted by the U.S. Labor Department, the restaurant in South Carolina was ordered to pay back wages to waiters who were paid as little as $2.13 an hour and forced to share their tips with the owner and managers of the restaurant.

The short answer is yes, a restaurant can require its servers to share their tips, a practice often referred to as “tip pooling.” However, an employer cannot require tipped employees to share tips with managers or supervisors. Restaurants must also pay all employees who participate in a tip pool – including servers, bartenders, and other tipped employees– at least the standard minimum hourly wage. That wage varies from state to state.

In the case mentioned above, that restaurant paid its servers less than the federal minimum wage, which is $7.25 an hour.

What is the minimum wage for tipped workers in Ohio?

In Ohio, there are laws designed to protect the rights of servers, bartenders, and other tipped workers. To start, there’s the state’s minimum hourly wage, which is currently $8.80 per hour. However, employers can pay tipped employees less than the standard minimum hourly wage, provided that a tipped employees’ hourly pay adds up to at least $8.80 per hour when including tips.

So, what’s the minimum amount that a restaurant in Ohio can pay a tipped employee? Such businesses must pay tipped workers at least 50 percent of the state’s standard minimum wage. That’s due to what’s called a tip credit. As a result, an Ohio restaurant can pay a server $4.40 an hour, provided that the waiter’s tips bring their average hourly pay up to at least $8.80 per hour.

Wage law violations, including minimum wage violations, can be very complicated legal cases. Even knowing what the laws are in your state might not be clear, especially if you’re a restaurant worker who receives tips as part of your pay. That’s why it’s important to talk to a wage lawyer as soon as possible if you believe you’re not being paid the right amount of money for your work.

The Ohio employment lawyers at Nilges Draher LLC have years of experience handling legal cases involving unpaid work, minimum wage violations, failure to pay tipped employees properly, and other wage law cases. As a result, we know the ins and outs of the state and federal labor laws that apply to these types of claims. That’s how we build strong cases and why we have such a strong track record of success.

Discover what our law firm can do for you if you believe you’re not being paid the money you rightfully deserve. Contact us today to schedule a free case evaluation with an experienced wage lawyer in Ohio. We serve clients nationwide and have three offices located in Cleveland, Columbus, and Massillon.